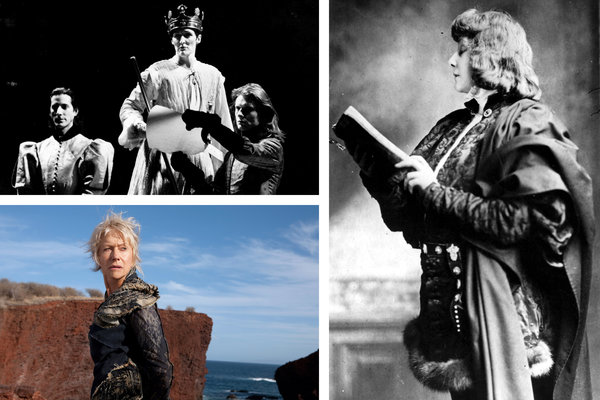 Some notable women as Shakespeare’s men. Image borrowed from the article linked below.

One interesting thing to note is that, in their round-up, they mention The Globe’s 2003 productions (including Taming of the Shrew), but no peep about this year’s. Presumably the critic either knows their stuff or at least did some research (or even a google), but didn’t know about The Globe’s international tour of their all-female Shrew. Why? I think it’s because The Globe haven’t really told anyone.

One thing I can’t fathom is why The Globe are hiding the fact this season’s excellent excellent Taming Of The Shrew is all-female. On tour, in Buxton for example, the posters make no mention of it. There’s no press about it, apart from for their Hong Kong leg.

Contrast that with the media excitement around The Donmar’s all-female Julius Caesar, and the discussion that fostered (positive and negative, home and abroad). Even your average all-male Shakespeare still gets loads of press off the back of its gender alone.

You might argue that the globe think it’ll put people off. I guess their people know their markets, but it certainly goes against what we’ve experienced with Titus. I suppose you could argue that it’s good they’re not making a big deal of the gender of their actors… but I’d argue that it’s something that still should be drawn attention to. There’s still al heck of a lot of debate and discussion to be had on the topic, and to be honest, most people haven’t ever heard of an all-female Shakespeare production.

I think it’s a topic worth talking about. But then, I’m writing on this blog, so presumably I’m biased.

This site uses Akismet to reduce spam. Learn how your comment data is processed.

CASTING: seeking a new Aaron
One week to go!